Annual Meeting in Berlin presents a wide spectrum of the GD

The Society of Dermopharmacy (GD) presented to the congress participants an extensive and demanding conference program on the occasion of the 3rd annual meeting in Berlin on 9 June 1999. In twelve lectures - from the dermopharmaceutical basic research to dermo-cosmetics and dermatotherapy - the society showed once again its large field of activities as well as the fruitful interdepartmental cooperation of its members.

"We want the experts!" These words by the the chairman of the Society of Dermopharmacy, pharmacist Dr. Joachim Kresken, Viersen, introduced the versatile program of the 3rd annual meeting and stressed that it has not been the primary target of the conference to fill the lecture hall with most participants possible but to present a demanding program which is subject to discussion among experts. By choosing the place of the conference - the Bundesinstitut für gesundheitlichen Verbraucherschutz und Veterinärmedizin (BgVV) [Federal Institute of Sanitary Consumer Protection and Veterinary Medicine] - emphasized Kresken, the GD shows its good relationship to governmental authorities. The GD has also been able to establish amicable contacts to further associations in the meantime. Thus Prof. Dr. Monika Schäfer-Korting, pharmacologists at the Freie Universität Berlin (the Free University of Berlin), the conference head, expressed her entire satisfaction about the fact that the General Secretary of the Deutsche Dermatologische Gesellschaft (the German Dermatological Society), Professor Dr. Wolfram Sterry, Universitätsklinikum Charité, Berlin (Universitary Hospital Charité of Berlin) emphasized the stimulating and advancing part of the GD for the dermopharmacy in his introductory lecture. 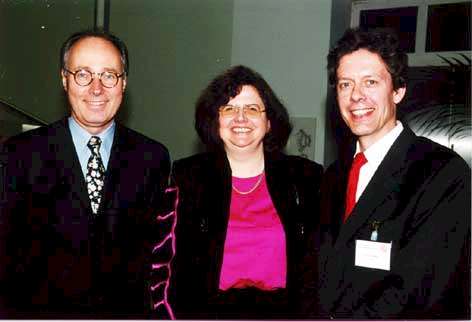 After this introduction the actual subjects have been immediately addressed in the conference by pharmacist Dr. Gerd Kindl, Post-Apotheke, Baldham and Professor Dr. Roland Niedner, Klinik für Dermatologie, in Potsdam (Klinic for Dermatology). Dr. Burkhard Kleuser from the Freie Universität of Berlin (Free University) spoke of sphingolipids as new antipsoriatrics. Sphingolipid-fission products as ceramids, sphingosine and sphingosine-1-phosphate (SS) form a new class of bio-active molecules. They play an important part in the regulation of proliferation, the differentiation as well as the apoptosis in the keratinocytes of the skin. Flow cytometric inhibitions display that the inhibition of the cellular growth by SPP - in contrast to the ceramids - is not related to an induction of the apoptosis or can be traced back to cytotoxical effects. The differentiation of keratinocytes is even significantly advanced by SPP. Kleuser presented the investigation results in this lecture which prove that a new type of connection is available for the treatment of hyperproliferating skin diseases as for example psoriasis vulgaris. 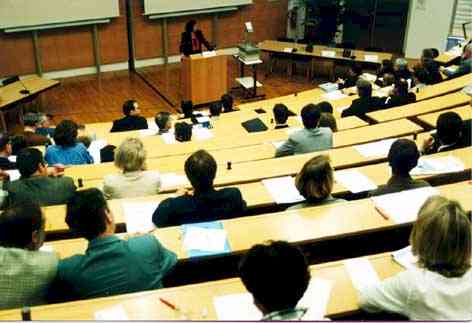 Reactive oxygen species (ROS) as the topical antipsoriatrics Dithranol, however, already belong for a long time to the therapy standard for the psoriasis. Besides the intended antipsoriatric effects, so explained Professor Gotthard Wurm, Institut für Pharmazie I (Insitute for Pharmacy) at the Freie Universität of Berlin (Free University), the ROS cause pro-inflammatory processes as well and are apoptosis signals. The development strategy consists of an improvement of the benefit-risk relation. The department headed by Wurm succeeded in in this context by a specificically targeted reduction of the ROS-establishment. Two analogous strategies had been followed for this purpose: on the one hand the development of potent 5-LOX-inhibitors with variable anti-oxidative potency and on the other hand the combination of 5-LOX-inhibition and cyto-differentiating activities in a drug model.

The lectures from the field of dermobiopharmacy and dermatopharmacology have been presented by professor Dr. Bernhard C. Lippold, Institut für Pharmazeutische Technology (Institute for Pharmaceutic Technology) of the Heinrich-Heine Universität of Düsseldorf as well as lecturer Dr. Christian Surber, Institut für Spital-Pharmacy (Institute for Clinical Pharmacy) at the Kantonsspital (Canton Clinic) of Basel. Professor Dr. Hans-Hubert Borchert, Institut für Pharmazie at the Humboldt-University of Berlin lectured about the possibilities of electron spin resonance (ESR) for the characterization of drug vehicle system interactions, as liposomes with skin. Spin probes incorporated in liposomes show in human skin in vitro significantly increased penetration speed compared to probes dissolved in buffer solution. The effect is quantitatively comparable to the enhancer effect of dimethyl suphfoxide (DMSO). The liposomal incorporated probe is still partly movable in deeper areas of the horny layer of the epidermis. Analyses to the reduction kinetics of the spin probe in skin have shown a retarded reduction for the liposomal enclosed probe. Experiments on humans, Borchert explains in the following discussion will be eagerly expected.

Ulrike Trier has informed about the results of her research at the Institut für Pharmazie II (Institute for Pharmacy II) at the Freie Universität of Berlin (Free University). In her thesis she deals with a new method for the determination of interactions between the nuclear factor Kappa B (NF-kB) and the DNA. NF-kB is an essential pro-inflammatory transcription factor which is inactivated by glucocorticoids. For the first time the fluorescence-correlation spectroscopy has been applied for the NF-kB-DNA-interaction analysis. For this purpose a chimera molecule from NF-kB and the green fluorescent protein has been built and expressed which has ideal features for the measurement. Positive evidence of biological activity is the detection of a serial specific DNA-link to the fusion protein. 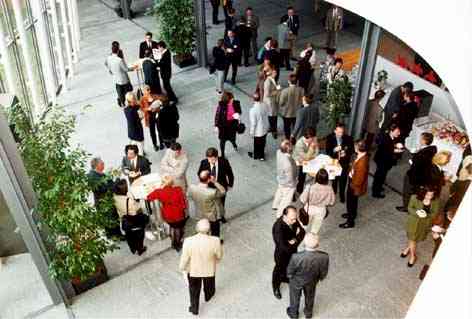 There will be increased demands for cosmetics regarding an efficacy and safety proof in future. Therefore methods are searched for which furnish objective measurement results for the collection of this data. Dr.Walter Wigger-Alberti, Klinikum für Hautkrankheiten (Clinic for Skin Diseases) of the Friedrich-Schiller-University in Jena gave an overview of bio-physical measuring methods for the determination of skin humidity, skin barrier, rubefaction, skin elasticity and skin relief.

Following these two lecture subjects which have mainly dealt with basic research there were practice-oriented reports from the field of dermocosmetics introduced by the pharmacist Leonhard Raunecker, Kitzingen and Dr. Andreas Schrader Beratungslabor (Consultation Laboratory) GbR at Holzminden. Professor Dr. Wolfgang Gehring, dermatologist at the Städtisches Klinikum (Municipal Clinic) in Karlsruhe discussed the useful employment of dermocosmetics for dry skin in his lecture. He presented his analysis concerning the influence of emulsions with differing emulsion types, active substances and concentrations. Dependent on the vehicle tested he realized for urea, glycerin, vitamin E, pantothenyl alcohol and borage oil an amelioration of the epidermal horny layer hydratation and a protective effect compared to washing solutions.

Dr. Martin Behne, Department of Veterans Affairs, Medical Center of San Francisco reported about his investigations concerning the significance of an acid pH-level for the epidermal barrier in the stratum corneum epidermis. He analysed whether an acidification of the stratum corneum is necessary for a recovery of the barrier after an acute damage. Behne noticed that the barrier recovery takes its normal course when acetone treated skin is exposed to an acid buffer solution. The barrier recovery in neutral or alkaline buffer solutions- depending on the ph-level, however, bas been retarded. By adding of calcium and potassium ions the recovery was even more slowly. Behne concludes from the results achieved that the barrier function is only built up in an optimal manner in an acid medium and that the retardation of the barrier recovery takes place by inhibiton of postsecretory lipid processing.

In the field of medicinal skin care special importance is attached to the customers' acceptance of a product. Diplom-Ingenieur (graduate engineer) Thomas Meyer, Sebapharm GmbH and Co. at Boppard examines more closely in this context advantages and disadvantages of various emulsion types. Furthermore determine intended effect, locality of application, age group, skin type and naturally also the active substance which emulsion type is most suited.

Dr. med. Frank Rippke informed about new research from the company Beiersdorf in Hamburg. He reported of comparing investigations regarding the anti-inflammatory effect of two dermocosmetics containing hamamelis distillate, an o/w-lotion containing 10 percent hamamelis distillate and a w/o-cream with twelve percent hamamelis distillate and in addition one percent hydrocortisone. Both preparations have been tested in comparison to their active substance-free vehicle as well as to a former after-sun lotion. 30 volunteers have been subject to this test by means of a modified UVB-erythem-test. The two hamamelis-extract-formulations showed a clear antiphlogistic impact whereas the hydrophil emulsion of the lipophile hamamelis formulation had a superior effect.

The dermatologists Dr. Eva-Maria Meigel, Hamburg, and professor Dr. Wolfgang Wiegrebe of the Institut für Pharmazie (Institute for Pharmacy) of the University Regensburg led through the last part of the conference program - the dermotherapy. He devoted himself first of all to the possibility to prevent the androgenetic determined alopecia by using the 5-alpha-reductase-type-II-inhibitor Finasterid. Lecturer Dr. med. Hans Wolff, dermatologist at the Ludwig-Maximilians-University of Munich presented the results of a study which covered 1500 men suffering from androgenetic alopecia. This test has been realized in 64 different clinics. After a treatment period of twelve months, the Finasterid-probationers had at a fixed area of their head on average 107 hair more than the placebo probationers. After 24 months the difference increased to 138 hair. The appearance ameliorated according to the opinion of a rating commission within 24 months at 66 percent of the Finasterid probationers whereas the hair of only seven percent of the placebo group appeared to be thicker. Side effects did not appear significantly more often in the Finasterid group than among the placebo-group - this also applies to potency and libido.

As plant drug for topical application against psoriasis vulgaris, the dermatologist Dr. Matthias Augustin from the Hautklinik (Dermatological Clinic) of the Albert-Ludwigs-Universität of Freiburg introduced a ten percent preparation of mahonia-aquifolium-Ur-tincture in ointment base. From a study concerning the preparation versus Dithranol-ointments Augustin comes to the conclusion that the mahonia-aquifolium ointment shows a clinically distinctive effect at psoriasis which is, however, not equivalent to dithranol. The tolerance for the mahonia-ointment, nevertheless, has been given a better rating by patients. Placebo-controlled studies as well as examinations of the reinalkaloids of mahonia are still pending.

Professor Dr. Axel Kramer from the Institut für Hygiene und Umweltmedizin (Institute for Hygiene and Environmental Medicine) of the Ernst Moritz Arndt-University at Greifswald pointed out in the final lecture by giving numerous examples that there is no ultimative antiseptikum. Each biotop and even at equal biotopes every formulation of a question requires a differentiating active substance selection. Thus not the most effective antiseptikum is the best suited but the most suited is the best one. In his conluding words the deputy GD-chairman, professor Dr. Hans C. Korting of the Ludwig-Maximilians Unversity of Munich summarized the highlights of the conference and announced date and place of the 4th annual meeting of the GD which is planned to take place at the Dorint Kongress-Hotel in Freiburg on 24 Mai 2000. 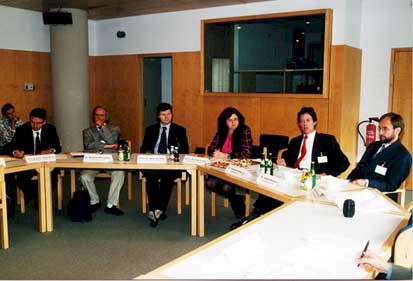